Hello! This is the third and final part of my Creating a Basic Synth in XNA 4.0 series. Don’t worry though, since I intend to write some more about this subject in the future, but since the topics I expect to cover will start getting more advanced, I’ll make them into a separate series.

In part II I’ve shown how to use the DynamicSoundEffectInstance class in order to to continuously play any single sound signal that we were capable of generating. I also wrote a separate article about oscillators (which you should also read if you haven’t done so already) which describes a simple class which takes care of generating some of the most common types of synthesized sounds.

Now it’s time to bring it all together and build a little interactive synthesizer that we can play like a piano on our keyboard keys! But for that, there are two major problems that we need to address:

This time I probably won’t be able to cover every bit of code used in the article, but you can download the sample source code at the end and hopefully it should fill any gaps.

The architecture of the synthesizer I created for this article is divided into three classes or components. You can see them on the image below:

What this diagram represents is that we’ll haves a Synth class with a bunch of Voice objects inside. You can think of a Voice object as being something that encapsulates a single individual sound, and provides some control over it. Unsurprisingly, the number of Voice objects created determine how many sounds the Synth can play at the same time, or in other words its polyphony.

As for generating the sound itself, the Voice object delegates that task to the Oscillator class that I already discussed. In this case, there will be a single Oscillator shared by all voices, which means that every key we press will be making the same type of sound (but at different frequencies).

So, how do we solve the problems of polyphony and time control using this architecture? Simple!

The Synth class deserves some special attention because of all the different things it will be doing. Let’s start with an image of its internals: 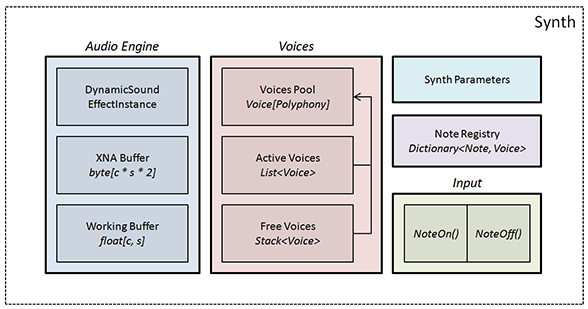 The Audio Engine bit is exactly what was described in part II of the series. It creates a DynamicSoundEffectInstance object plus a couple of buffers, and links everything together, taking care of submiting a new audio buffer when needed. The only big difference is that here the audio engine will loop over all active voices and delegate the task of modifying the audio buffers to them.

The Voices section is responsible for managing all the voices. It uses three different data structures for this:

Interaction with the synthesizer is done through two methods named NoteOn and NoteOff. The NoteOn method fetches a free voice, initializes it with the frequency corresponding to the note we want to play, and adds it to the active voices list. The NoteOff method simply tells the voice corresponding to that particular note to stop playing.

For this we also need the Note Registry which is a simple dictionary that keeps a connection between each playing note and its respective voice object.

Okay, enough of the architecture. I’ll jump straight into some code now. I’ll try to cover the most important bits, but download the source code at the end of the article and play around with it.

I’ll start with the simplest step which is generating the audio signal. I’ve already talked about this subject before. Basically we’ll create a class called Oscillator whose sole purpose is to generate audio signals of different types.

But in comparison with the Oscillator class I described earlier, I made a few modifications this time to make it a bit easier to understand:

You may have noticed that I also declared a delegate with the same signature as these methods. This will be useful to store a reference to one of the oscillator methods, and being able to change them on the fly on my synth class. That’s all for this part, and with this we’ve got the four most common sound waveforms covered. Let’s move to step two then.

Next I’ll be talking about the Voice class. I’ll start with the public interface of the Voice class, and what each of its methods need to do. The comments should be self-explanatory:

Implementing it is not too hard. The Voice class keeps a reference to the parent synth class which is used to access the shared oscillator. Calling Stop will make the voice stop immediatly by setting the IsAlive property to false. The only part that might not be too obvious, is why I multiply the sample by 0.3f before adding it to the buffer. I do so in order to lower its volume a bit and prevent the resulting values to start saturating with just a couple of notes pressed. Still, if you try to play too many notes at the same time, you’re bound to run into distortion problems, unless you start using a more intricate mixing algorithm (instead of just adding the samples together).

At the end of this article I’ll show an upgraded version of the Voice class which allows you to add a simple fade-in/fade-out to your voices which gets rid of a few annoying sound problems and makes everything sound better. But for now I’ll move on to the Synth class.

A large part of the Synth class is the low-level audio engine management that I’ve described in part II, so I’ll skip right over those and only talk about the significant changes.

To start with, there’s the four data structures that are used to manage all of the voices. They’re all initialized in the constructor of the class. First, we create an array of voices (sized Polyphony) which will be our voice pool. This is the only point in our application where we will be instantiating Voice objects - after that it’s just references to existing objects being moved around. Next is the stack of free voices, which initially contains all of the voices in the pool. Then there’s a list of active voices, which starts out empty, and is used to keep all the voices that are playing at any given moment. Finally we keep a dictionary linking notes (which in this sample will be an integer value with 0 corresponding to C4, and moving up and down in semi-tones) to the voices they correspond to. This is necessary when we tell the synth to stop playing a note, so that it can delegate the order to the appropriate voice.

Next in line is our SubmitBuffer method (once again see part II for clarifications). The first big difference is that we need to clear the buffer (fill it completely with zeros) at the top of each submission. This is necessary because our voices won’t be overwriting the buffer like we before but rather adding their values on top of the existing buffer, so wee need an empty plate to start with (think of it as calling the GraphicsDevice.Clear method for graphics). I’ve gone and moved the ConvertBuffer method into a static helper class, but its contents are still the same as before.

Where most of the magic starts is inside the FillWorkingBuffer method. Whereas we used to directly write to the buffer inside of that method, now the only thing it does is iterate over all the active voices, calling Process on them, and removing any dead voices at the end of it. Notice how I iterate over the voices in reverse order, in order to be able to remove them without invalidating my for-index.

And finally we have the two methods that provide interactivity to the synthesizer, NoteOn and NoteOff. When calling NoteOn, the first thing it does is check the note registry to ensure that note is not already registered. If everything goes well, it tries to fetch a free voice from the top of the stack, registers that voice to the current note, initializes the voice with the appropriate frequency, and finally adds it to the active voices list. The SoundHelper.NoteToFrequency method is used to calculate the right frequency for each musical note (with 0 corresponding to C4 and so forth). Check the source code at the end for the implementation.

As for stopping a note, it’s a matter of checking the note registry to see if it exists, stopping the corresponding voice and removing the note from the registry.

You could stop by now, and you’d have a simple synthesizer ready to be played. All you’d have to do is link each NoteOn and NoteOff call with your keyboard’s KeyDown and KeyUp events and you’d be set. But if you do that, you might notice an annoying little “pop” sound when starting or stopping each note. Keep reading to see how this can be solved.

There’s a problem with abruptly starting or stopping a sound: the sudden loss in amplitude of the signal can easily create a noticeable “pop” sound that ruins the whole experience. You can hear that in the video sample at the end of the article, whenever I disable the fade mechanism.

In order to prevent this, I’m going to modify the Voice class a bit in order to add a controllable fade-in and fade-out period to the sounds. Fading a sound basically means multiplying the value of the sample you generated by a floating point number between 0 and 1. So you need to find a way to start this floating point number at 0, move it until it reaches 1, and then do the opposite motion at the end of the sound.

What surprised me the most about this is that even if the fade duration is really small (like 5ms, which is so small you probably won’t even notice a difference), it will still be enough to get rid of those unwanted noises! Here’s a list of all the changes I did, but check the source code archive at the end for the actual implementation.

Changes to the Voice class:

This is actually one of the subjects I want to treat in more detail in a later article. What we’re doing is basically modifying the volume or amplitude of our signal over time. This is something usually referred to as an envelope or ADSR envelope. The names I chose (Attack, Sustain and Release) are related to that subject too! But for now just think of them as being simple fade operations.

Doing these changes has a few interesting implications in our synth. The graphics below describe in general terms how the volume of our sounds vary with time, and help correlate them with the NoteOn and NoteOff commands that we issue. Initially, before adding fading to our Voice class, what we had was something like this: 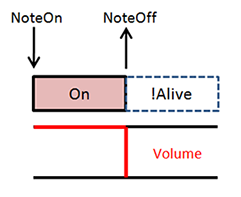 Each voice was alive only during the time between our NoteOn and NoteOff, and the changes in volume were abrupt. Now with these changes, we have something like this instead: 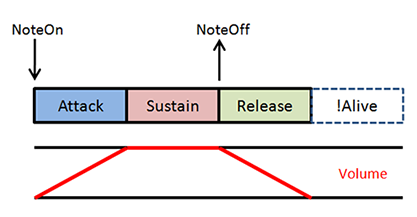 See how the note remains alive for a bit even after the NoteOff command? And finally, there’s a special case I’d like to talk about. What happens if your NoteOff command happens before the attack phase ends? In that case we should skip the sustain phase completely, and start reversing the volume back to 0 from the point it was currently at:

And that’s all for today! I hope you enjoyed the series, and feel free to leave any questions or suggestions in the comments section below. As usual, I’ll end the article with a video sample and the source code for you to compile and play around with. Until next time!

Note: You can disregard the Piano class. It’s just a hack I threw together to render a simple piano keyboard procedurally.